As a child I used to daydream about what it would be like to visit a dog show. Years of looking at The New York Times’ coverage of the Westminster Dog Show trained me for the day that I would finally see a dog show in the flesh. I would say it was akin to the armchair traveller finally leaping into a real life voyage — and perhaps also like young fashion students attending their first fashion show in Paris. Well, this was not Paris, nor was it in New York City where the Westminster Dog Show holds their annual event. But I was excited to drop in for day two of the three day Annual Montréal Dog Show held by the United Kennel Club. This year’s event was conveniently at Place Bonaventure in downtown Montréal from Friday November 7th to Sunday the 9th.

END_OF_DOCUMENT_TOKEN_TO_BE_REPLACED 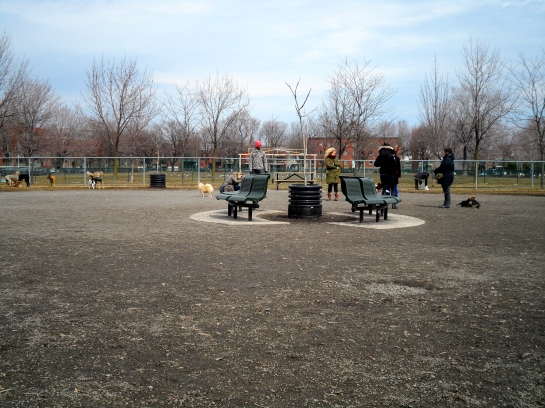 Parc Sir-Wilfrid-Laurier (“Parc Laurier”) is one of my favourite parks in Montréal. It is situated in the Plateau neighbourhood on the north side of Laurier between Rue de Mentana to the west and Rue de Brébeuf to the east, and enclosed at rue Saint-Gregoire to the north.

The park is perfect because of all the amenities it offers and reminds me of why I love Montréal. In my home town of Toronto, the parks are sub par and kind of analogous to the quality of bread between the two cities — absolutely amazing in Montréal and mostly garbage in Toronto. Toronto parks are often small green spaces haphazardly inserted into neighbourhoods without too much thought or love. That is, you will find a short walkway, a small play area and equipment for children, and if you are lucky you might get tennis courts and maybe a hockey arena in the winter. Some groups of teenage kids might hang out the areas where there is concrete to practice skateboarding tricks, dog walkers quickly stroll by, and a few toddlers may be supervised in the playground. (I know there are some excellent parks in Toronto, such as Trinity Bellwoods, but I find these more of an anomaly, particularly in the downtown areas.)

Here in Montréal, the parks are loved. They are used to their fullest, even in the winter. Parks are an important element of every neighbourhood and are vast green spaces used by surrounding residents. A hockey arena or two are erected in the cold months, and often the park administrators will pool water into a corner for free ice skating. In the warmer months, families and friends bring bottles of wine to sit in the grass and share a meal, amateur acrobats practice juggling and tightrope, and various organized sports are in session. It often seems that everyone in the neighbourhood are out and in the park, so much so that there is nary an empty spot in the parks. As one Québécois friend explained to me, because the residences in the city rarely have their own backyards the neighbourhood parks are instead used as an extension of their homes.

END_OF_DOCUMENT_TOKEN_TO_BE_REPLACED

Is this not the greatest thing ever?

The website’s Flash opening sequence is just one reason for visiting the site: www.architecturefordogs.com. Be prepared for an accompanying soundtrack and mute your device as necessary.